A feral child has been discovered in rural Russia, Reuters reports.

The five year old girl, whose development is more akin to a two-year-old, was found by Russian police in the Siberian city of Chita. Unable to speak a human language, she had taken on the vernacular of her adoptive canine parents.

“For five years, the girl was ‘brought up’ by several dogs and cats and had never been outside,” a police statement said. “When carers leave the room, [she] jumps at the door and barks.”

“Natasha” has been transferred to an orphanage while her (human) mother is questioned by police. The whereabouts of her biological father is not known.

Everything you wanted to know about human children raised by animals, including the unique case of the ostrich boy, is available at feralchildren.com.

Visitors to Adelaide Zoo were evacuated after a Sumatran orangutan mounted a successful escape bid, the Associated Press reports.

The 137-lb female short-circuited an electric fence by jamming a stick into its power supply, before fashioning a makeshift ladder and scaling the walls of her enclosure.

Karta the orang utan. You may sleep safe at night.

Karta, 27, remained atop the fence for half an hour before deciding to return to captivity.

“I think when she actually got out and realized … she shouldn’t be there, so then she’s actually hung onto the wall and dropped back into the exhibit,” zoo curator Peter Whitehead told reporters.

The zoo was evacuated as a precautionary measure, and vets armed with tranquilizer guns stood by in case things turned nasty.

“It’s very possible she was looking for Pusung because to her he’s missing and perhaps he’s around here somewhere. That’s possibly what was going through her head but of course we can’t see into their heads and we can’t ask them to tell us,” Dr Lichfield said.

A British holidaymaker had his passport stolen by a kea, stuff.co.nz reports.

The Briton was awaiting delivery of his passport in Milford Sound, in Fiordland National Park, when the bird struck. A bus driver was retrieving luggage from a storage locker when the kea snuck in and pinched a brightly-coloured courier bag. The driver was unable to stop the feathered highwayman, who immediately flew off into the surrounding trees.

The Scotsman, who did not want to be identified (and now, of course, cannot), said: “My passport is somewhere out there in Fiordland. The kea’s probably using it for fraudulent claims or something. I’ll never look at a kea in the same way.” 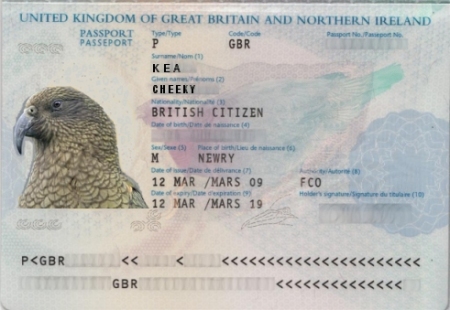 A second replacement passport could take up to six weeks to reach South Island, giving the kea ample opportunity to travel in the meantime.

Apologies to readers who have been searching for British passports, only to be rewarded with an image of our avian chum above. Happy trails!

The discovery of one of the oldest and most complete fossil primates yet known was announced to much fanfare on Tuesday. Darwinius masillae, new genus, new species, is described in PLoS One, and has been nicknamed “Ida” by her describers.

In outward appearance, D. masillae is essentially lemurid, but lacks the derived characters of strepsirrhini such as the tooth-comb and toilet claw. The authors place the specimen in the adipoidea, and ally it with the haplorrhini, in which tarsiers, monkeys and apes are classified.

Although the authors have been quite explicit, saying they “do not interpret Darwinius as anthropoid”, this didn’t stop the press from immediately attaching the “missing link” label to the specimen, much to the chagrin of PZ Myers, John Wilkins and Chris Beard.